Today, I uttered the words my husband dreads most (well, almost): "I want to go to Ikea".

A new kitchen is on the horizon - the old is at least 30 - and the loss of yet another baking tray into the house's bowels thanks to decrepit cupboard backs  pushed me into activity.

Our closest Ikea is in less-than-salubrious, Croydon, on the site of one of South London's biggest power stations. The only remaining signs of this previous life are the two enormous chimneys, now painted in Swedish blue and yellow stripes. I love 'em because I inevitably get lost driving there and can and use them as beacons to lead me into the car park.

London's FT reports that the business, founded in 1943, now sells one of its Billy bookcases every 10 seconds. Last year, there were 684 million visitors to Ikea’s 345 stores around the world while its total revenues reached €28.5bn.

Rather creepily, it is now also reported that one in 10 Europeans are conceived in one of its beds. 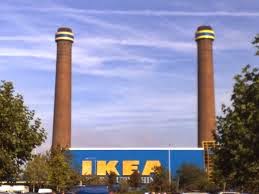 Which led me to observe today that Ikea is now not just about cheap and cheerful furniture. Its in-store restaurants - offering good quality food at incredibly cheap prices thanks to the sheer economies of scale - have become a kind of integrated social service, a giant, light and airy soup kitchen for both young and old, poor and not so poor. Today, I watched a bunch of very old people sit and drink endless cups of free tea in comfy armchairs, reading magazines and hordes of very young parents drink coffee, chat and re-fill baby bottles ad infinitum (I watched one mum who couldn't have been a day over 18 fill three bottles with milk and stash them in her pram bag) and observed for half an hour while two carers/social workers sat with their young disabled charges sharing coffees and cake in a cafè that has enough room for scores of space-guzzling wheel chairs.

Downstairs, the queue for child minding in the Smaland playrooms snaked around the corner and I pondered how many young parents seek Ikea out as much for the hour or two it gives them free from their little ones as they do for the chance to cart home a book case in a flat-pack.

The truth is that there'd be few of us (apart from the stonking über rich) who haven't had to go to the ubiquitous Swedish chain for something at some time. And anyone who says they haven't tried and surreptitiously enjoyed the meatballs or gravlax are probably telling porkies. 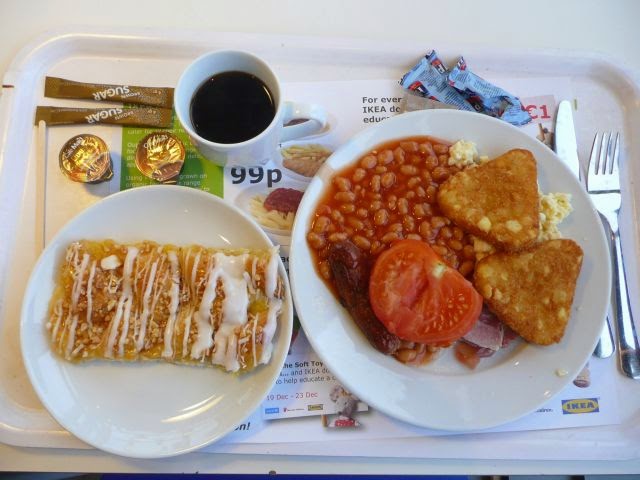 And if you're short of a quid (or not for that matter), where else can you get a huge, full English breakfast for £2.30 along with bottomless coffees?

It seems to me that Ikea has created a giant, flatpack curtain that manages to hide the stigma of poverty for a short while for many. Indeed, what seems to have begun as a service to cultivate loyalty from customers has morphed into a high capitalist way of offering less well off customers the chance to feel comfortable and mingle with the richer ones - even if they can, in fact, only afford a bowl of soup and a free bread roll.

I'm not sure how I feel about this - but I found today's first kitchen foray way more interesting than I'd imagined.